I have been using a Bluetooth keyboard with my Apple TV 3. With recent (2013) updates of firmware for the Apple TV, the Bluetooth keyboard feature has now become useable. The keyboard is really great when you want to search for something. You can actually type instead of using the painfully slow on-screen keyboard.

I  have been using the Apple keyboard that came with my iMac. I don’t like it for computer use, so I’m using a USB keyboard on the computer, but this keyboard is an ideal remote control for the Apple TV. It’s fairly compact and fits on the sofa table. You don’t have to use an Apple keyboard. Any Bluetooth keyboard should work.

The keyboard mappings felt so natural, I guessed them the first time, but here they are:

My Apple TV now seems to remember the keyboard pairing indefinitely. I have to wake up the keyboard maybe once a day with a tap of the power button. Range is at least 12-15 feet – if you’re sitting back further than that, you need a smaller TV. đź™‚

One problem I ran into — I don’t think it was a keyboard problem per se, but I created an account on Crackle with a gobbledegook password. When I entered this password on Apple TV, it wouldn’t accept it. I eventually changed the password, and then it was accepted on the Apple TV. I don’t think this problem is  specific to Crackle, either. I suspect that the Apple TV software just filters certain characters. Some special characters are okay, but I’d watch out for ^ and ~ (caret and tilde), as those were in the rejected password.

Update March 26: After Apple TV software update 6.1 was installed on my Apple TV, my Bluetooth keyboard stopped working. It also wouldn’t show up as available to pair. I restarted my Apple TV (Settings/General/Restart) and tried again, and I was able to get the keyboard to pair. You should also try just turning Bluetooth off and then back on, on the Apple TV. (Click where it says Bluetooth Searching…). Pairing has always been kind of finicky on the Apple TV.

The Bluetooth controls are under Settings/General/Bluetooth.

Update May 10, 2014: One cool thing about using the Bluetooth keyboard: it gives  your Apple TV an RF remote control that can work without direct line of sight. So, you can use your Apple TV even if it is concealed in a cabinet, or on the other side of a wall.

If you have ever had trouble with accidental or unintended ALL CAPS, you might be interested in disabling your caps lock key. In my experience accidental activations of caps lock greatly exceeded those occasions on which I actually want it. As in, I can hardly think of a case where I need it. The caps lock key, and its little green light (on some keyboards) are not fixed in hardware, but are controlled by your Mac’s software.

It’s easy to disable it. Start by opening System Preferences. Choose Keyboard. Within the Keyboard preference pane, choose the Keyboard tab as shown. 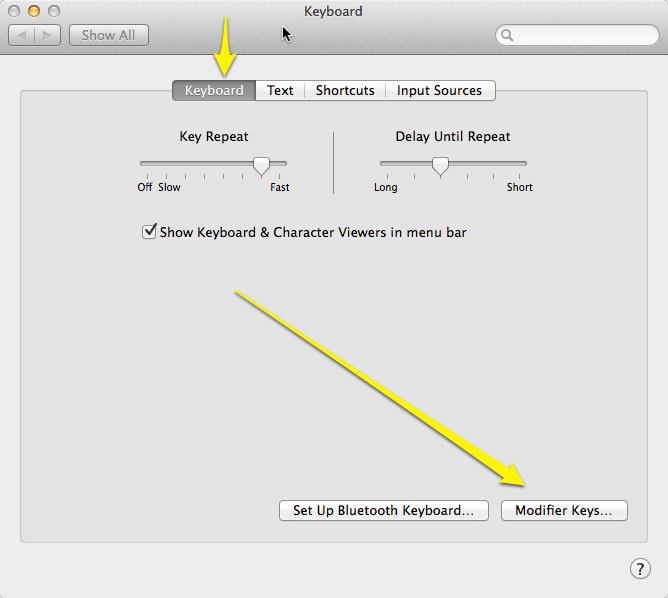 Then click the Modifier Keys… button. A pop-up will appear. Click on the Caps Lock toggle, and select No Action. 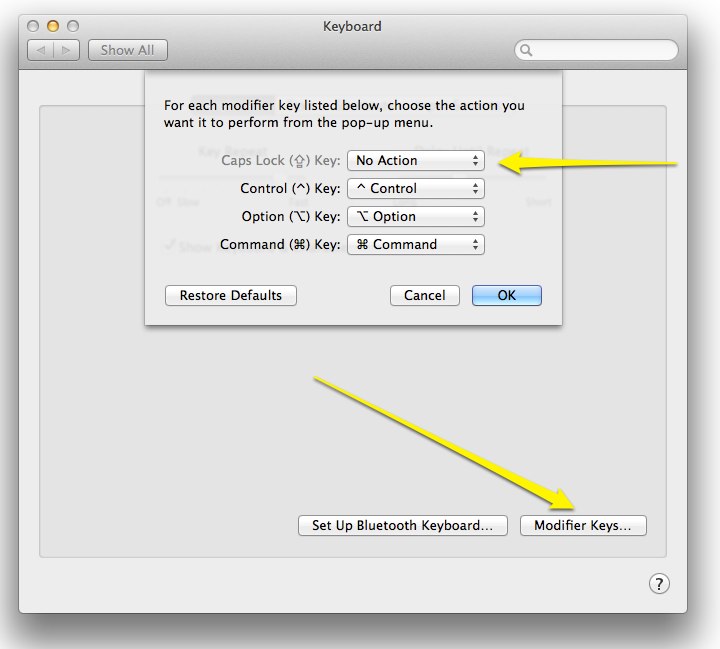 Now, click OK and close System Preferences. That’s it. Your caps lock key is completely disabled. Enjoy your freedom from accidental eruptions of capital letters in your text.

Just remember that you did this, and don’t decide later that your keyboard is broken. In the few cases where I need to type a sequence of capitals, I find it easier to just hold down the shift key instead of going back to System Preferences.

Also note that the change only applies to the one user account where you made the change. This is a good thing, so when your spouse or kids are using the computer under their own name, the keyboard works as they expect it and they don’t come complaining that your caps lock key is broken.

If you have an older Bose Sound Dock for your iPod or iPhone, you may be disappointed that it doesn’t work with newer devices. Somewhere along the way, Apple changed how iDevices get charged. If your Sound Dock uses the older FireWire charging scheme, but your i-device uses the newer USB scheme, you’ll get a curt message that charging is not supported with this accessory.

All iPads use the new USB charging scheme, but beyond that, an iPad won’t even fit in the Sound Dock.

So, here’s a pair of inexpensive gadgets that will overcome these problems. I used the 3031-FWUSB Charge Converter from Griffin Technology. This is hard to find, but a similar item is this one from Scosche.

Next, you need a short cable to free your iPad from the confines of the dock. It might not be a bad idea for the iPhone also, since it gets a bit precarious balanced on top of the charge adapter. I got the RadTech Dock Extender. Unless you need a longer one for some reason, get the shortest cable available. 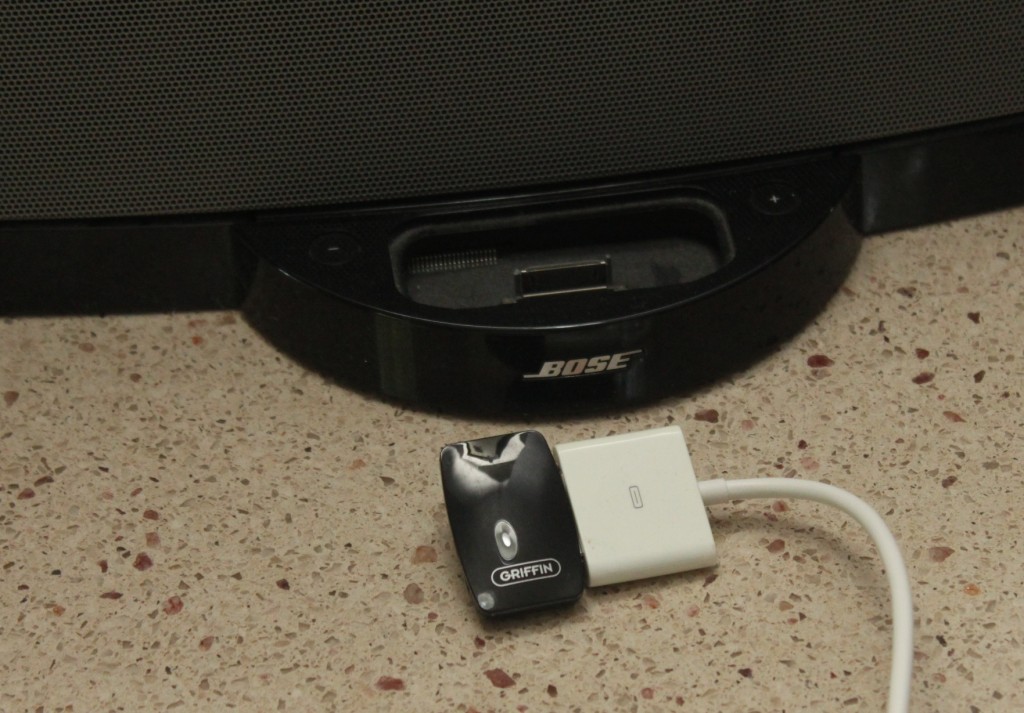 So, you should have something that looks like this:

The Bose Sound Dock is a great-sounding accessory. The right adapters keep it playing with your newer gadgets. The same general idea can keep some of your other accessories functioning. This might work with some older car docks or accessories as well.

I got a report that the following adapter worked with an iPhone 4S and the old Bose Sound Dock:
CableJive dockStubz Charge Converter and 30-pin Pass Through Adapter for iPhone, iPod, and iPad.

This also worked with the extender cable above, although the cable isn’t strictly necessary for the iPhone like it is for the iPad. I know that the setup pictured works with iPad versions 1 and 2.

This article is a re-post originally published in 2010, reproduced here after the blog recovered from  some Indonesian junk that was going around. (Hacked by Indonesian script kiddies.)

Why should anyone need instructions on listening to audiobooks on an iPod … this should just work, right? This tip is not about downloading the audiobooks, or installing them on your iPod. This is about accessing and playing them once they are in your iPod. You’ve bought your audiobooks, you’ve put them in iTunes, you’ve synced your iPod. iTunes says your audiobooks are synced. Now, you’re looking at your iPod, and where the heck are they? By default, they don’t seem to appear anywhere except maybe (temporarily) in “Recent Items”.  They don’t appear anywhere under Music, and since they aren’t music, that sort of makes sense.

There really ought to be an Audiobooks item, right alongside Music and Photos. Here’s how to get one. Begin at your iPod main menu.

Go into the Settings Menu.

Now, select Main Menu. What a  confusing name. This isn’t returning you to the main menu, it’s editing the settings for the main iPod menu.

Now, press the iPod menu button twice to return to the iPod menu. You should now see a new item there, Audiobooks. All your audiobooks will be in there.

I really don’t approve of Apple’s policy of hiding menu items until they are needed, or in this case until the user is at his wit’s end, and searches the internet for an answer, and finally has to dig into Settings to enable something that should have been there all along.  Frankly, I’m hoping that this hide-and-seek with the menus was some sort of Steve Jobs quirk, and that it will be laid to rest along with him.

Apple really needs to fix this in the iPod firmware, or maybe in iTunes. If nothing else, when audiobooks exist on an iPod, this menu item should be turned on automatically.

This tip worked for a couple of generations of iPod nano. It should be similar for other iPod models.

Dennis showed the group this tip at this month’s meeting, and promised that the details would be on our web site.

This tip is for iOS (iPhone or iPad) users. Create a bookmark in Safari called “Open in 1Password”. Replace the URL for the bookmark with this snippet of Javascript:

When you visit a page in Safari, and realize you would rather open it in 1Password, so it can fill in your logon information for you, invoke the bookmark and the page will re-open in 1Password. The ‘op’ in the script stands for One Password.

This trick only works with the new version of 1Password. Version 4, I believe.

This cutsie graphic going around contains an important lesson. When you send an email to a group using TO or CC, everyone in the group can see everyone else’s email addresses. You might think, So what? We’re all friends.  Yes, but what about when your friend forwards the message on to a few dozen or a few hundred of his friends? Do you really want all of them to have your email address? If any one of those friends-of-friends is infected by a spambot — BINGO, you all start getting spam.

In case you think this is an unlikely problem, it happened to me this Christmas. I received a Merry Christmas email blast from someone I’ve never met, who lives thousands of miles away — a relative of a co-worker. The happy email was addressed to hundreds of people, and all of their email addresses were visible. Shortly after that, I started getting a LOT more spam.

Another reason to use BCC when emailing a group is to prevent an Unsubscribe Storm.  This starts when a large mailing gets some smart-ass, controversial, or off-topic responses. The responders use reply-all, so everyone can see their brilliance. This annoys people who are now getting a lot of messages they don’t want, so some of them also reply to all, saying “Take me off this list”.  At that point, nearly everyone wants off the list, and the volume of messages saying so becomes really alarming.

It sounds funny, but it can get really out of hand. I saw a case where a message like this had a large attachment. The resulting volume rendered heavy-duty corporate mail servers unusable for the rest of the day, and the mess took a while to clean up.

If BCC had been used, then reply-all would only reply to the sender, and no harm would be done.